I owe you guys an apology!

I received the bumper stickers a while ago and they've been sitting on my desk preparing for mailing. Sorry!

This week my daughter and I went and purchased the stamps and the envelopes and we're going to get these out this weekend come h*** or high water (no offense to Ike). You should be receiving them by the end of next week.

I want to make sure that Navy Vets remains a great place for Navy Veterans to join, share, meet, and organize reunions from. With that in mind, the other day I noticed an advertisement from Google in the side bar that said "Military Hotties". I just didn't think that was appropriate for this site so I blocked the offending advertiser from my Google Adsense account.

If you guys ever see an inappropriate advertisement, please let me know and I'll add the company to the filter. It… Continue

Where are the Bumper Stickers?

Just wanted to give you folks a heads up that the bumper stickers everyone signed up for are being printed at this very moment! I'm 'hiring' my daughter to address and stuff envelopes as soon as they get here. Katie (14) has been looking for some work this summer and this is her first job.

If you're not sure what I'm talking about, I sent an email out when we hit 300 members to sign up for a free bumper sticker. Don't worry if you didn't make this giveaway, though! We'll have many… Continue

Excerpt: There are loads of resources out there that are designed to help veterans find work after they've returned home and to make their job searches easier and more rewarding. Here are a few places that former members of the military can look to for help finding the job they've always wanted.

Check out this article: 100 Job Solutions and Resources for Military Personnel

I was talking to Tim and told him how bummed I was that I missed the first episode of Carrier on PBS. I just did some searching though, and found that PBS has the entire series available online! 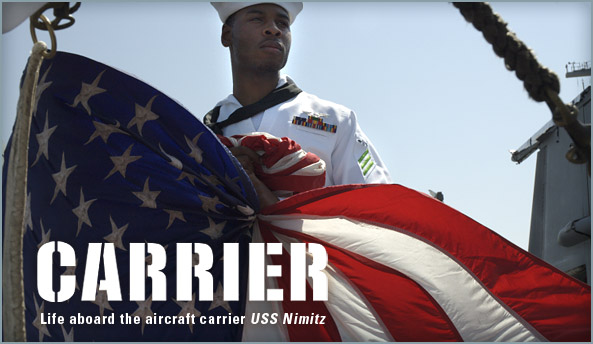 WASHINGTON (NNS) -- A Navy SEAL who sacrificed himself to save his teammates during combat operations in Iraq will be posthumously awarded the Medal of Honor by President George W. Bush the White House announced March 31.

The parents of Master-At-Arms 2nd Class (SEAL) Michael A. Monsoor will accept the nation's highest military honor on behalf of… Continue

For you ol' salts, this is a fantastic story on wired about salvagers - guys that travel all over the globe rescuing ships. The Cougar Ace had $100,000,000 worth of cargo on it - mostly Mazda automobiles - when it became grounded. The ship was sitting at a 60 degree angle when the salvagers got on board.

In the Middle of the Med

I'm not sure that other forces get to experience the same feelings a sailor does at sea. Every once in a while when I drift off, I still think back to starry nights on the deck of the USS Spartanburg County out in the Mediterranean.

A Tank Landing Ship (LST) is a flat-bottom ship so in calm waters it didn't slice the water like a tin can, it tended to bob and weave on it gently. We ran off of a couple diesel…

I sent this out as a broadcast email earlier today (with a spelling error... argh!):


I wanted to take this opportunity to express my thanks for being an early adopter and one of the first members on NavyVets, the social network for the United States Naval Veteran.


NavyVets isn't owned and operated by some media giant who badmouths our military in public and then sells their data for advertising dollars - NavyVets is owned by a Naval Veteran!

Send a Holiday Voice Message to the Troops!

Be Careful when Giving to Veteran's Charities

Fox News has a story on Veteran Charities and how many of the charities are simply scamming veterans. This is a story that hits home because I hope this Network grows to a point that I can donate significantly to Veteran Charities!

Right now, all the profit from the Navy Vets Store will go to the Navy Relief Fund. The Advertising you see in the right-hand side-bar goes to… Continue

How to Add a Picture to your Profile

One of the great things about this Social Network is the ability to see photos of your shipmates and find folks you recognize. Be sure to add your photo to your profile first:


Then, you can continue to add other photos using the Photo tab


We've got a lot of profiles with no photos, so…

It's been way too long!

I've visited the sites that my shipmates have put up to meet and greet other men and women they served with. I've been to the Yahoo! Groups, been to Classmates.com and Military.com. What I found on all these sites was that they were always difficult to navigate and terrible to try to find what I was looking for.

I bought the domain name, NavyVets.com quite a few years ago. I've had many offers for the domain but I knew that I could put something together and get everything in a… Continue

How to use the NavyVets Blogging Tool

First, what the heck is blogging? Blogging is nothing more than a journal. It's where you can put down your thoughts - perhaps on the politics of the day, the military, or even sharing a great story with everyone. Blog posts will be displayed on your "Footlocker" and also shared on the home page as they are written.


That's right, when you right a blog post, all the members will see it on the home page, which shows the most recent posts. Or - you could mark it so only your…

Be Sure to Join your Commands and Invite Other Shipmates

I'm up to the "K"s on adding ships! Let me know if there's a station that I don't have a group set for that you'd like to join. Once you join the command, be sure to use the invite feature to send your shipmates an invitation to join your command. My goal is to make NavyVets.com the best social network on the web for Navy Vets.